Empowering Women in Science Through Music…

One does not meet a Cambridge University professor who is in an indie rock band everyday; or who, on top of that, uses his academic and musical influence to empower women in science. Have I mentioned that he paid for his education by playing the drums? It is difficult not to be impressed by Tim Bussey, a behavioural neuroscientist, musician and advocate for higher female representation in Science, Technology, Engineering, Mathematics (STEM) leadership positions. He jointly leads the Translational Cognitive Neuroscience Lab with Lisa Saksida and also happens to be the lead singer of ‘Violet Transmissions’. 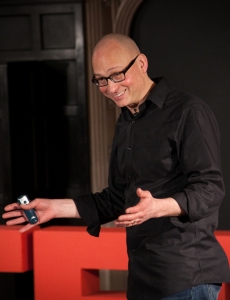 Tim recently gave a talk at this year’s TEDxCambridgeUniversity event, which was held on Saturday 14th March at St John’s Divinity School. As one of the lead organisers of this event, I was delighted when he accepted our team’s invitation to speak. Tim fitted our theme ‘By Other Means’ perfectly, addressing issues such as gender inequality in science via unconventional and creative ways. In collaboration with ScienceGrrl, an organisation supporting women in science, ‘Violet Transmissions’ released ‘She Blinded Me With Science’ last November. The music video features successful and passionate young women scientists, including a structural engineer, an experimental psychologist, a nanochemist and two laser physicists. This is a fantastic project that draws attention to the gender inequality in science by bridging the gap between the neurosciences and the arts! During his TEDx talk, he not only raised awareness and entertained the audience with an excerpt of his recent video, but encouraged the implementation of practical solutions, such as the ones proposed by the ScienceGrrl report ‘Through Both Eyes: the case for a Gender lens in STEM’.

Tim also highlighted his concern for the shortage of women who make it to the ‘big leagues’, despite having come across numerous admirable young female neuroscientists as a principal investigator, and outstanding undergraduate applicants as a Director of Studies in Natural Sciences at Pembroke College. Although I was going back and forth, making sure the event was running smoothly (and perhaps having more than one panic attack throughout the day), I was lucky enough to be fulfilling front-row duties during Tim’s talk. I also had the opportunity to chat with him, though briefly, whilst distributing our team’s gifts to the speakers. It turns out his lab had previously collaborated with mine! All in all, I was very glad to meet such an engaging and humble Professor, who genuinely relates to his cause. Take a moment to think about the female personalities that have blinded you with science!

This entry was posted in Music.